A Book By Its Cover: Picturesque Egypt 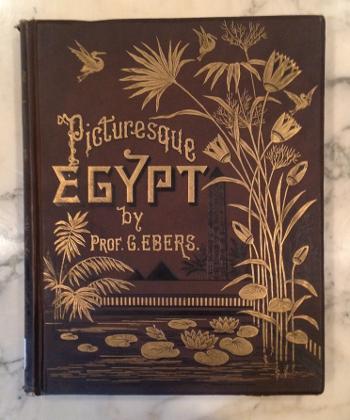 Georg Ebers,  celebrated German Egyptologist and novelist (1834-1892), wrote Picturesque Egypt in 1878.  This pebbled brown cover is decorated in gilded flora and herons, as is the spine.  It evokes exotic mystery with its three-dimensional word  - EGYPT.  Even the rustic letters of author and title cry look at me. Inside, the author prefaces the two volumes with his admiration of the places and people that shaped one of the world's most important civilizations.   35 artists contributed hundreds of fine illustrations, including Sir Lawrence Alma-Tadema who won a gold medal at the 1864 Paris Salon with his Pastimes in Ancient Egypt. Their friendship had a great influence on Alma-Tadema's painting style at the time. Published simultaneously in London, Paris and New York, Picturesque Egypt was translated from the German by Clara Bell.  German author, English translator, Dutch-born British illustrator (and many German ones) put together a beautiful publication for an international audience.