Reading Stephen Fliegel's insightful article, 'The Cleveland Table Fountain and Gothic Automata' in the 2002 issue of Cleveland Studies in the History of Art introduced this reader to known evidence of the existence of other fountains in the fourteenth century. What is this evidence? Inventories, especially those famous enough to bear reprinting in not so distant centuries. The Ingalls Library has two late nineteenth century inventories, published respectively for Charles V (1380) and Louis I d'Anjou (c. 1360). Though they lack images, the descriptions of said fountains belonging to kings, are wonderfully detailed. The two books are now on display for your viewing pleasure, in the library vitrine, along with some wonderful vintage postcards of Gothic architecture, also mentioned in the Fliegel publication. 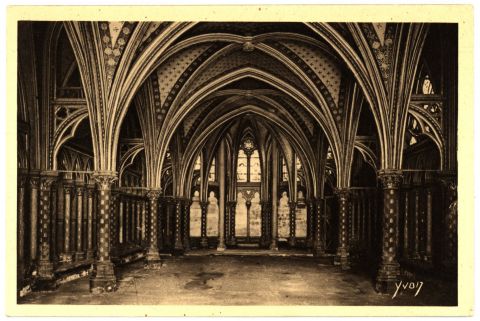 Citing various architectural elements as grand influences of the fountain's intricate design are the lower chapel of Sainte-Chapelle in Paris; Notre-Dame Cathedral in Coutances, France; and Ely Cathedral in England. These wonderful old postcards picture the Ely lantern tower; its octagonal shape of cusped arches with crockets and openwork tracery surmounted by crenellations, echoing the top of the table fountain. And pillars, arches, and diapered decorations so like those in Paris, can be seen on the table fountain. 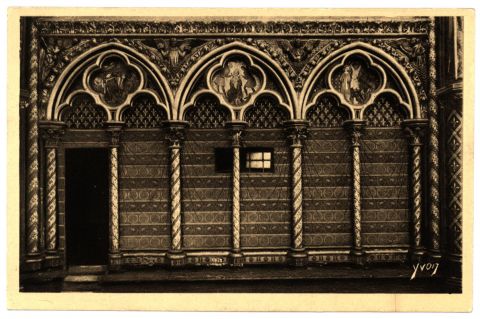