Most archivists remember their first surprise encounter with a famous signature. Mine happened during my first year at the Museum Archives of Cleveland Museum of Art when I came across correspondence between the museum and W.E.B Du Bois. As an undergraduate sociology major I studied Du Bois and read several of his essays alongside texts by other notable sociologists like Max Weber and Emile Durkheim. Often considered one of the founders of sociology, Du Bois was also a founding member of the National Association for the Advancement of Colored People (NAACP) and its influential magazine The Crisis, writer, historian, and civil rights activist.  In a speech honoring Du Bois several years after his death, Dr. Martin Luther King Jr. remarked “Dr. Du Bois recognized that the keystone in the arch of oppression was the myth of inferiority and he dedicated his brilliant talents to demolish it.”[1] 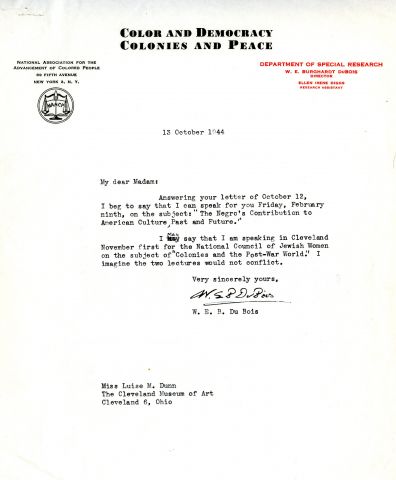 The correspondence, which describes the practicalities of setting up a 1945 lecture at the Cleveland Museum of Art titled “The Negro’s Contribution to American Culture, Past and Future,” is written on the stationary of the NAACP, where Du Bois was director of the Department of Special Research at the time. We don’t have a copy of the lecture, but for illustrative purposes, a similarly titled unpublished essay states that “…above all, in two fields, the Negro has made his great contribution…and that is in art and in labor.” Du Bois goes on to write:

…the hard work of the American Negro has helped to develop America, has furnished a tremendous laboring force, and sometimes when we have an eye for work, it will be recognized as a great contribution. On the other hand, we are already beginning to see the beauty of Negro in American music and we shall come to see beauty in other lines to which the American Negro has contributed. We can, therefore, well think of the Negro element in America as an integral part of American life and as having made a permanent contribution to American civilization.[2]

Further correspondence, held by the University of Massachusetts Amherst Libraries, indicates that Du Bois also attended a luncheon at the museum.[3] Later, Margaret Brown, Supervisor of Administration for the Department of Education wrote to Du Bois thanking him “for the very interesting lecture you gave at the Museum…We are putting your name back in our file of lecture suggestions with the hope that we may have you again sometime at the museum.”[4]

The Museum Archives is open Tuesday to Friday from 10am to 5pm.