“...the thrill of the hunt” ~ Beth Owens, describing reference work 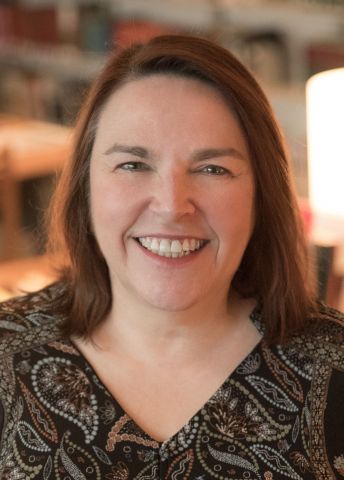 In January 2018, Beth Owens assumed her post as Research and Scholarly Communications Librarian at the Ingalls Library. Of her new position, Owens says, “It feels like I won the lottery” because the Ingalls Library and the Cleveland Museum of Art are warm but professional.

Owens studied art history in her undergraduate degree at Northwestern University in 1983, which involved an independent study on Caravaggio and the Utrecht school of Dutch painters. “I love the realism and the emotion depicted,” she says. “You can feel it.” Fourteen years later, she was so excited by the CMA’s The Crucifixion of Saint Andrew by Michelangeo Merisi da Caravaggio when she saw it on her first visit to the museum that she brought her sons (then in first and fourth grade) back to see it. She had recently moved to Hudson, Ohio, and had come to the museum with a newcomers group to attend the Faberge in America exhibition. “I remember my first visit to the museum very well. I was so impressed. Everyone was so friendly and welcoming.” She says of intending to be a greeter during the forthcoming exhibition, Yayoi Kusama: Inifinity Mirrors, “I can’t wait to welcome first-time visitors.”

When she found her personal life in flux, Owens was drawn to the order and logic of librarianship. Erupting into a peal of laughter, she admits that even her spices and DVDs are alphabetized. Owens earned her Master of Library and Information Science from Kent State in 2007.  She had an initial interest in cataloging, and for her practicum, she helped digitize and catalog a collection of Cuyahoga County maps from the late 1800s for the Cleveland Memory Project. Recognizing that cataloging and digitization can be solitary undertakings, Owens—a clear extrovert—says she missed having regular contact with people. She loves working with people and comments, “You can learn a lot by just listening to others. I believe that the more you experience life through other people’s stories, the more you learn about yourself.”

In terms of the specialization of art librarianship, Owens never imagined she’d be able to combine her two passions. Her eyes sparkle when she thinks back on her discovery of the job posting for Patron Services Librarian at the Cleveland Insititute of Art (CIA), which she held for eight-and-a-half years. Gobsmacked, she had the reaction of, “Wow!” The CIA has a different vibe than the CMA. Owens finds that studio students often have immediate needs when it comes to library research, while the students using the Ingalls Library (primarily students in the joint Cleveland Museum of Art/Case Western Reserve University art history and museum studies program) have more involved research needs. That degree of engagement is gratifying for her to support. It makes Owens feel that she is contributing to their respective career trajectories, which is fitting for her job title since scholarly communication refers to multiple stages in the research/ publication process. As to what draws her to reference work, she says it’s “the thrill of the hunt.”

Outside of work, Owens enjoys Zumba, knitting, and reading. The last book she read was The Four Seasons: a Novel of Vivaldi’s Venice, which she discovered while assembling a display of reading material for the Womens Council in anticipation of Eye Witness Views: Making History in Eighteenth-Century Europe (02/25/2018-05/20/2018, co-organized by the CMA, the J. Paul Getty Museum, and the Minneapolis Institute of Art). She also keeps busy with three grandchildren. Endearingly, one of them couldn’t wait to show Owens his first library card, so he urged his mother to send a photo of it by phone.

Also outside of the CMA, Owens teaches ESL via the Internet on week-ends, continuing work that she was doing before joining the staff at Ingalls Library. “I just love it,” she says. “I didn’t want to give it up.” Owens’ students through VIP Kid are pre-teens in China. Sometimes the Common Core lessons focus on vocabulary terms related to neighborhoods, so inevitably, libraries come up in conversation. Her students tend to describe librarians as mere sorters of books, a misconception she likes to correct. She reframes the vocation by telling them that a librarian is someone who “help[s] people find information about things they want to know more about.” Her ESL teaching is strengthened by her experience as a librarian: for example, she is well equipped to walk students through the need to cite sources and give credit where credit is due, which, she explains, can contradict the common way of thinking in a collectivist culture like China.

As her position is a new one at the library, Owens can help chart her own course in consultation with her supervisor, Lou Adrean (Head, Research and Programs). “I’m reading everything I can get my hands on” about scholarly communication, she says. In particular, she is committed to supporting “the open aspect of research.” She explains that not everyone has the same opportunities for education, a point driven home by her ESL teaching. (She notes that VIP Kid is working to obtain funding  from philanthropic sources so children in rural China can take advantage of the opportunity to learn ESL. Currently the students live in cities where the Internet is strong enough to support the Skype-like platform). Encouraging openness in scholarly communications redresses the situation of “have and have not” and—notably—supports the museum’s mission of exisiting for the beneift of all the people forever.

In the spirit of facilitating openness and supporting alternative models for research dissemination, Owens is coordinating a Wikipedia edit-a-thon in partnership with Art+Feminism in its fifth year of operation. She hopes to inspire entries for female artists who have work in the CMA collection and also female artists from the May Show, an exhibition of Cleveland artists hosted and judged by the CMA from 1920 to 1993. Owens has been practicing on Wikipedia in preparation. In a characteristic merging of her professional interests, she finds that her ESL teaching instincts kick in frequently, prompting her to correct grammatical errors.

If you’d like to participate in the Art+Feminism Wikipedia edit-a-thon by expanding on, or writing, an entry anytime between 10 am and 9 pm on March 7, register here: https://docs.google.com/forms/d/e/1FAIpQLSfXHXPOF0t8g3JjXyhmQSJgnIqCXgOQzxwbJBIm4uq-EFNe7A/viewform. Or, simply drop by the Ingalls Library on March 7 to say hello to Beth!