The Jazz Age: Modernism and the May Show

The Cleveland Exposition of Artists and Craftsmen opened six years after the 1913 Armory Show in New York. By this time, the revolutionary implications of European paintings and sculpture shown there had been largely absorbed. Although there was an active modernist movement in Cleveland that emerged around 1910, in the first decade of the May Show very little of modernist influences could be found. The local press denounced the movement and art schools focused on teaching traditional techniques. As a result, May Show visitors encountered works rooted in 19th century concepts of subject and form.

Modernist design began to appear in the late twenties. Inspired by both Viennese design and the urban landscape, artists in enameled steel and wrought metal created sophisticated works that were award winners in their categories. Rose Iron Works in particular embraced modernist style. Founder Martin Rose, born in Hungary, studied metalsmithing in Vienna at the end of the 19th century when the city rivaled Paris as a center for design innovation. Rose immigrated to America in 1903 and settled in Cleveland, a city well known as a leader in steel production and metalworking. Designer Paul Feher joined the firm in 1929 and over the next five years he and Rose created some of the firm’s finest modernist work. 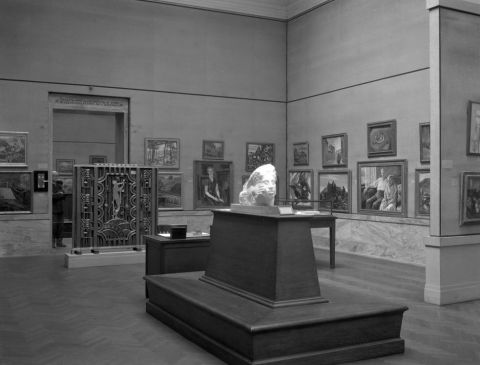 The monumental wrought iron and brass screen, Muse with Violin, c. 1930 by Rose Iron Works, Inc. and Paul Feher, won special mention in the 1930 May Show. Cowan pottery designer Viktor Schreckengost also studied in Vienna in the 1920s, absorbing the modern aesthetic and interpreting it in his work. His 1931 punch bowl, Cocktails and Cigarettes, a first place winner in that year’s May Show, also reflects the impact of modern technology and the urban experience. The young Schreckengost reveled in the jazz age nightlife of New York City. The cobalt-blue glaze he used on his jazz bowls reminded him of the city’s neon lights. The craft tradition, strong in Cleveland for many years, was elevated to the level of fine art in the May Show where artists in ceramics, glass, jewelry, and metalwork embraced modernism. 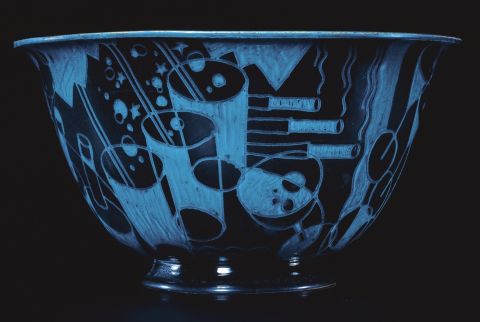 You can find more information about the May Show and Cleveland artists in the Ingalls Library and Museum Archives.