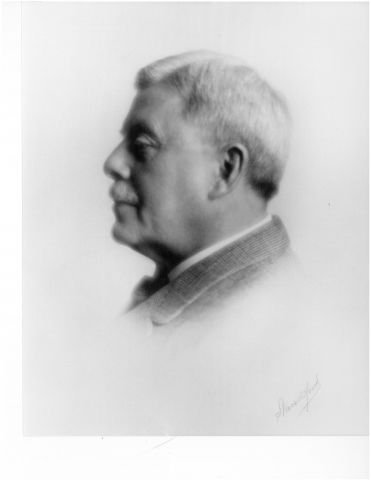 If you looked down Euclid Avenue in 1910, most of the buildings you would see were owned by Ralph Thrall King (1855-1926). President of the Realty Investment Company, King was among Cleveland’s elite. Born in 1855 in Monroe County, New York, King graduated from Brown University in 1878. While in Providence, he began visiting art galleries, particularly the Vose Gallery, where his interest in art was piqued. Mr. Vose encouraged his interest in the arts and taught him connoisseurship.  King built a substantial personal art collection. Catholic in his tastes, he was nonetheless particularly interested in prints. He collected every period and type.

King joined the museum’s advisory board in 1914 and board of trustees in 1915. He served on the accessions committee and executive committee and was elected vice president in 1921. He voluntarily served as curator of prints from 1919-1921. King was also one of the founders of the Print Club of Cleveland, the first museum affiliate group formed for the specific purpose of contributing works of art to a museum collection. The Print Club has never donated works by James McNeill Whistler, perhaps because King was an avid collector of Whistlerania. Between 1922 and 1925, he donated 158 Whistler etchings, drypoints, and lithographs to the museum. Exhibited in 1923, the curator of prints wrote: “We may well be proud to know that through the kindness and generosity of Mr. and Mrs. King we have in Cleveland one of the half dozen great Whistler collections in the United States, and that Whistler can be studied here as well, if not to better advantage, than in the British Museum (CMA Bulletin, April 1923)”.