A Librarian’s Review of The Booksellers

How refreshing to see someone wearing a mask for reasons other than avoiding COVID-19: in The Booksellers (Blackletter films, 2019), Adam Weinberger rummages through the potentially dusty collection of a deceased art historian and her husband, looking for treasures. Other cross-overs with the art world include a private library with an eclectic design that’s an homage to M.C. Escher; an exhibition at MoMA PS1; the storefront of Printed Matter; a book inscribed by Susan Sontag; and Leonardo da Vinci’s notebook bought sight unseen at auction by Bill Gates. Included in the Cleveland Institute of Art Cinematheque series by the CMA’s Curator of Film, John Ewing, this documentary about the New York rare book dealing profession was available until recently for digital screening in lieu of in-person screenings.

The thesis is encapsulated by footage of screenplay co-writer Larry McMurty accepting the Academy Award for best adaptation of a book for Brokeback Mountain; he thanked the booksellers of the world, saying ”the culture of the book… [is one] which we mustn’t lose.” With the current economic crisis, even with bookstores being lauded as essential (as in articles and opinion pieces), successful businesses like the Strand—featured in this film—have had to lay off staff. Watching The Booksellers in spring 2020 causes the precariousness of rare book dealing to seem even more pronounced.

While collectors, auctioneers, and book scouts are featured, the dealers are the focus. They run the gamut from sporting handlebar moustaches to bright blue hair, tweed to sleeve tattoos. What they share is passion and the thrill of the hunt. For example, Bibi Mohamed recalls the 40-volume Balzac set that spurred her career; as the first one in the door at an estate sale in the wee hours of the morning, she ran towards her “babies.” They are also avid readers; writer Fran Lebovitz, whose comments add spice to the documentary, casts dealers from the past as wearing glasses because they had all been reading in the dark since childhood. Some dealers enter the profession when barely out of childhood as part of the family business, and that reinforces a dearth of ethnic diversity. Even when opportunities open up for women in the profession that’s roughly 85% male, 15% female, old habits die hard. For example, the three sisters who run Argosy recall that after they took over the family business, they were passed over as a source of information in favor of any man on site, even if he were a customer. Rebecca Romney beams, sharing that young female bookworms have decided to become dealers after seeing her on Pawn Stars, which she felt was key to bridge building. As dealer Heather O’Donnell comments, it’s essential to “pivot or die.” Pivoting (read: survival) is celebrated with the uncorking of champagne at the New York Antiquarian Book Fair. Lest that image romanticize the profession, there is a shot of dealers setting up for the event in the rain. Another image that disabuses the viewer of any romantic ideals is dealer David Bergman navigating a busy New York street with two folios strapped to his bicycle, bringing them to his cramped apartment. 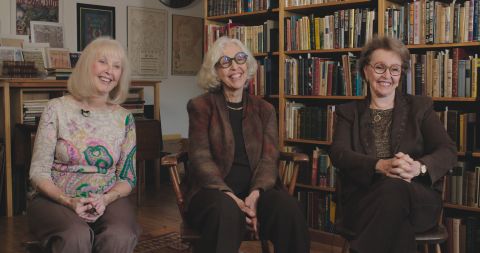 A key way that dealers have demonstrated adaptability is by expanding the scope of what they sell. Dealer William Reese notes that previously, historians did not acknowledge items of antiquarian interest beyond books to be visual evidence, and this points to the growing importance of visual literacy. A broader context is available to historians thanks to dealers selling items like a Castro doll, Beat photographs, and Annie Oakley’s gloves. Dealers can also function as historians: female dealers Leona Rosenberg and Madeleine B. Stern, who were intially given the cold shoulder by the bibliophilic Grolier Club, uncovered the fact that Louisa May Alcott wrote pulp fiction pseudonymously with surprising titles like A Long Fatal Love Chase. Kevin Young, author and Director of the Schomberg Center for Research in Black Culture, identifies another hybrid role: dealers can function as curators, by lending their books to exhibitions (collector-turned-dealer Justin Schiller was an example at age 12), and helping to shape collections. It’s heartwarming when Schiller says that working as a dealer never felt like work, and that he was willing to sell an item at a loss if it went to the right owner.

That the documentary is visually delightful is unsurprising, both because it venerates the book as an object and because it is largely about reading. There are close-ups of bejewelled spines, marginalia, and buckled pages, plus shots of the unexpected, from 150,000-year-old mammoth hair in a photographic expedition album to a Hans Holbein cover made of human skin. Also, interspersed quotations linger on the screen long enough for the viewer to read them before the associated speaker or writer’s name appears. As the final example, “The library will endure. It is the universe.” – Jorges Luis Borges. Hear, hear!

The Booksellers is directed by D.W. Young and executive produced by Parker Posey, known in library circles for her role as a clerk in Party Girl.