The Love Affair of Ruth and Sherman Lee 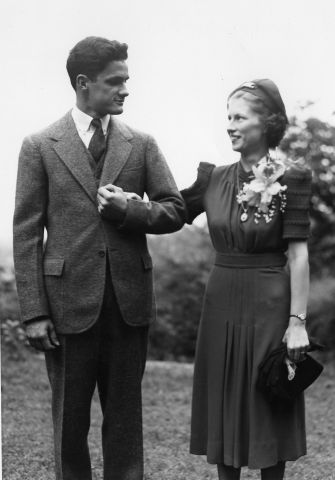 The museum archives invites you to explore the Sherman and Ruth Ward Lee Family Papers, which document the personal lives of the Cleveland Museum of Art’s third director and his beloved wife, Ruth. Donated by the Lee family, the collection tells the story of the love, perseverance, and success of Sherman Lee, one of the 20th century’s most esteemed art museum directors and art historians, and Ruth Lee, his partner and collaborator.

With Ruth by his side, Sherman Emery Lee led the museum for 25 years. The couple met as students at American University in Washington, D.C. where Lee was studying history and where he first studied art history. Fellow classmate Ruth Ward appeared as one of America’s Beauties of the Eastern Seaboard in the April 12, 1938 issue of Life Magazine, and Lee wasted no time marrying her on September third of that year. He claimed that she ‘civilized’ him and she was at his side throughout their 70-year marriage.

While Sherman Lee was revered as a scholar and connoisseur, the family papers reveal the romantic and playful side of a couple beloved by friends and family. The story unfolds through love letters, playful missives to the Lee children, in official records, family photographs, genealogical material, and memorabilia that include letters dating from Lee’s Navy service during World War II, and after the war when he served as advisor on collections in the Arts and Monuments Division of the Supreme Allied Command in Tokyo. Photographs document the relationship between the Lees, their family, friends, and colleagues throughout the world. Images and a published Lee family genealogy trace the family’s roots in America.

The records of Dr. Lee’s tenure as museum director will open to researchers in 2019.