At the American Library Association conference in New Orleans, the vibe leading up to the conversation between former First Lady, Michelle LaVaughn Robinson Obama and Librarian of Congress, Dr. Carla Hayden on June 22 was joyful anticipation. One attendee near this writer danced in the aisle to Pharrell William’s Happy, and many of the 10,000 or so attendees* jumped to their feet shortly thereafter for a performance by young locals from the Trombone Shorty Foundation, with professional musician, Troy Andrews at the helm—making for a fitting prelude since they performed in Michelle Obama’s talent show at the White House in 2014. 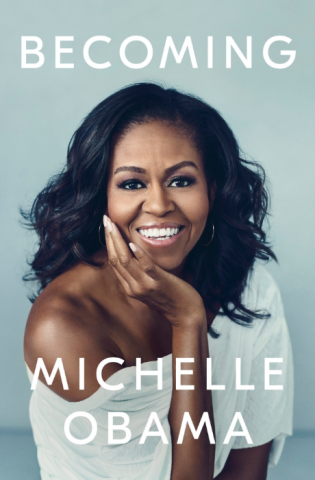 Obama was present to promote her forthcoming memoir, Becoming (2018, Penguin). At the White House, she says, “There was no time to reflect in eight years.” There is plenty on which to reflect; as she explained, between visiting the likes of the Queen and Bishop Desmond Tutu, she sometimes managed to forget the previous week’s itinerary. She was reminded recently that she had visited Prague, and although initially resistant, she conceded when confronted with photographic evidence. In the book, she explores issues such as race relations and the sensation that she and Barack were “measured by a different yardstick.” As the only African American First Lady, she is practically seen as a unicorn and she recognized that “to have the opportunity to tell my story is interestingly rare.” Given her engaging delivery at ALA—which was grounded yet proud and vacillated seamlessly between a serious and humorous tone—Becoming is sure to be a hit.

While editing her memoir, Obama has minimized recreational reading to keep her voice consistent, but she still enjoys reading for escapism, citing Zadie Smith as a favorite. Her other strategies for achieving balance include exercise (up to three times a day) and taking time out for friends.

Reading and libraries have been part of her life since childhood. At age four, she received her first library card, which made her feel like “a big time person,” although she realized it would be a while before she advanced to material organized by the Dewey decimal system; Obama laughed when the mention of this system elicited riotous approval from an audience member. When she graduated to that level, “reading became work,” she recalled. And, sometimes, work led to reading: before college, she worked at a book bindery. That experience instilled a strong work ethic in her, as she worked “shoulder to shoulder with people making a living for their families” without complaint or regret. The monotony also made her feel ready to attend college. Toward the end of the conversation, Hayden asked Obama's advice for a teen (and potential future librarian) in the crowd. Her advice? Attend college to become more competitive.

Back to Obama’s childhood...at home, she read to her toys, and years later, she read to her children. Michelle read Life of Pi by Yann Martel with their youngest daughter, Sasha, and Barack read J. K. Rowling’s Harry Potter series with their oldest daughter, Malia. Also, as a Christmas tradition, Barack brought the girls to a bookstore, one of two places (the other being the golf course) where he felt truly comfortable during his tenure as President. “We are readers, the Obamas,” she said, evident from the many shelves—not to mention boxes—in their home filled with books.

Obama’s nuclear family provided a solid foundation for her parenting style. She commented, “Who I am today is because of my parents.” From Fraser and Marian Robinson, she learned the importance of honor, honesty, accountability, and treating all people the same. As a result of her parents’ influence, she strives to demonstrate to her daughters the need to “be good people in the world every day.” Of her mother, she said, “She kept the whole White House grounded” when she lived on site during her son-in-law's two terms as POTUS. She knew her mother would listen with patience and empathy but that she would trust Obama to solve any problem herself because self-reliance was instilled in her from a young age. Her parents’ respect for children’s agency and their fostering of self-confidence relates to one of the roles of libraries articulated by Obama. Her voice broke when she said that kids visit libraries wanting someone to tell them they are OK, and that the interactions at libraries can make a difference. She fostered a similar dynamic in the White House, by inviting young people to trick or treat, take workshops, and do internships. She wanted them to feel that they could walk through the doors and not merely peer through the gates. Thanks to active mentoring, eventually, “they owned the place” and once you feel that way about the White House, she asserted, “there’s no room you cannot go in.”

Curiously, Obama served as her own counterpoint to the perspective of ‘the sky’s the limit.’ For women in particular, she expressed concern about the idea that you can have it all, when ‘all’ is pursued simultaneously. She recognized that her family was “on his [Barack’s] rocket ship ride” and she contemplated scaling back on her professional aspirations during his ascent. Women must advocate for themselves, she said, and ask for what they need. For example, when the former lawyer, Mayoral Assistant and Assistant Commissioner of Planning and Development for the City of Chicago interviewed for the position of Vice President for Community and External Affairs at the University of Chicago Medical Center, she provided a long list of demands—and was successful. She also accepted her mother’s help getting her daughters ready in the morning so she could go to the gym before work. Being female and being professional aren't mutually exclusive traits, but the combination presents endless challenges. For instance, Obama expressed frustration at having the media focus on her footwear while she advocated for military families; kudos to the camera crew at ALA for not cutting to her shoes during that segment for footage projected live on screens in the convention center.

Although Obama eschewed the unicorn comparison, her caliber can easily feel beyond reach. Over the next few days at ALA, though, several internal initiatives came to mind that would hopefully make her proud. Since the previous ALA conference, the Ingalls Library has celebrated women’s accomplishments by hosting an Art+Feminism Wikipedia edit-a-thon for the first time; led and participated in book discussions with the Womens Council; continued to provide research support for inner-city high school students in the Museum Ambassadors program; and introduced mentorship for new staff. Also, as is the case with many work places, breaking bread together is a bonding activiting. The library and archives staff morale committee organized an event featuring self-edification and self-care, with five blenders preparing smoothies in sync to keep everyone nourished during a trivia match. Lest you think we’re too virtuous, let it be known that we also devoured a sheet cake for Library Workers Day.

Becoming will be released in November.

*according to Library Journal