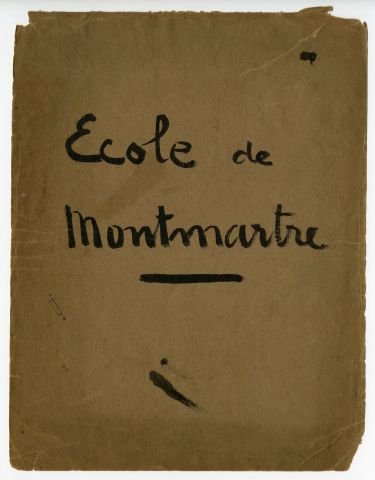 The artist Pierre Bonnard is featured in the museum’s current special exhibition, Private Lives: Home and Family in the Art of the Nabis, Paris, 1889-1900, which explores the beautiful, enigmatic, and paradoxical work of Bonnard, Edouard Vuillard, Maurice Denis, and Félix Vallotton. When the Nabis group dissolved, Bonnard’s life focused less on the Paris art scene. He did not retreat entirely, however. In the 1920s, Paris was the epicenter of the art world, attracting the best and brightest of society anxious to celebrate life after the devastation of World War I. The districts of Montparnasse and Montmartre were the home to diverse groups of artists. Montparnasse artists were mostly impoverished emigrants attracted by cheap rents and creative atmosphere, whereas the artists of Montmartre associated together based on status rather than artistic tastes. A small group of these Montmartre artists led by Georges Joubin and Pierre Bonnard founded an artistic movement which they named L’École de Montmartre. Along with Joubin and Bonnard, founding members included Henri Rioux, Guy Dollian, Jean Frelezeau, and Edouard Hofer. The group started meeting in December 1928 and published their manifesto in early 1929.

In January 2020, the Ingalls Library was offered the opportunity to acquire the archive of L’École de Montmartre from Bernett Penka Rare Books of Boston. Discovered at a country fair in France, the provenance of the records is unknown. The archive consists of over 100 items ranging from handwritten meeting minutes, letters, and calling cards, to contemporary newspaper clippings, the official application for association filed with the French government, copies of their manifesto, and the first three issues of their official journal, Témoignages,  each containing original signed engravings. There is little published information on this ephemeral but important artistic movement. It would make an interesting research topic for some lucky art historian!