Rodin, Degas and Italian models in 19th Century Paris. Read all about it in the Ingalls Library!

The Ingalls Library receives an astounding 1,200 periodical titles, many of which feature articles about the museum and its collections, history, and activities as well as articles written by museum staff. This ongoing series gives you a glimpse into the varied and interesting topics that can be found in the serials collection.

In Susan Waller’s fascinating article entitled, “Rodin and the modèle italien,” from volume 27 issue 1 of the Sculpture Journal, the author examines a prominent community of Italian art models that coalesced during the latter half of the 19th century in Paris. This group of models often dressed in peasant costume, frequently posing in outdoor model markets and making the rounds of the studios of prominent Parisian artists in search of employment. Many became versed in poses that exemplified classical “types” and “attitudes.”

Waller notes that Italian models were preferred over models from other ethnic backgrounds by a number of “teaching ateliers” and academic artists working in Paris at the time. Waller states that, in the eyes of many a Parisian artist,

“their classical proportions and command of the gestures that were the foundation of Christian and classical iconography seemed to provide a connection between       nineteenth century Paris and Renaissance and antique Rome: they furnished a ridge that spanned centuries of history and miles of geography.”

However, for August Rodin, a craftsman turning towards modern subjects and natural attitudes, these trained Italian models proved problematic when their studied poses got in the way of instinctive naturalism. While preferring some Italian models for their “Mediterranean type” and “classical proportions,” Rodin was selective. Said Rodin:

“At the beginning, when I asked for a model, I asked him in what workshops he had posed. If he came out of one of the schools, ah! I noticed it at once, as soon as he climbed on the model stand; I saw him assume one of the movements he had learned there, and this movement was invariably false.” 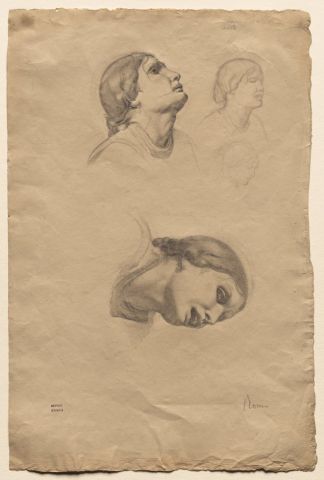 A work from the CMA collection, an Edgar Degas drawing called Four Studies of the Head of a Young Italian Woman,can be found in the article and is pictured above. Degas’ Italian subject is identified as Rita Cacciala and the study is included in the article to exemplify the ways in which the poses employed by many Italian models were drawn from the history of painting as well as more academic artistic pursuits.

You can read the article in full in the Ingalls Library Lounge. Volume 27, issue 1 of Sculpture Journal will be available in the Lounge’s Recent Acquisitions section for the next few months.