Synchronicity at our Wikipedia Edit-a-Thon

Our primary goal in hosting a Wikipedia Edit-a-Thon on Martin Luther King, Jr. Day was to expand entries for artists of color (and a secondary goal was to host an open house for the Ingalls Library and Museum Archives). I hadn’t expected to find specific references tying the artist I’d long admired for his bridging of painting and sculpture, Sam Gilliam, to Martin Luther King, Jr.

From an exhibition catalog from his solo exhibition at the Studio Museum in Harlem (Paintings by Sam Gilliam Red & Black to “D,” 1982), I learned that Gilliam commemorated the first anniversary of MLK Jr.’s death by painting April 4, 1969, which is in the National Gallery in Washington. He folded the canvas and allowed the red and black paint to dry overnight. A tie-dye effect resulted, tying it to an African aesthetic, and the work was evocative of blood stains.

From Contemporary Visual Expressions (Smithsonian Institution, 1987), the catalog for his show at the Anacostia Neighborhood Museum, meanwhile, I learned that King’s assassination underscored the severity of racism for him, but the artist was determined not to be shut out by a system dominated by white people.

As a child, I would have referred to these gems as a ‘double coincidence.’ 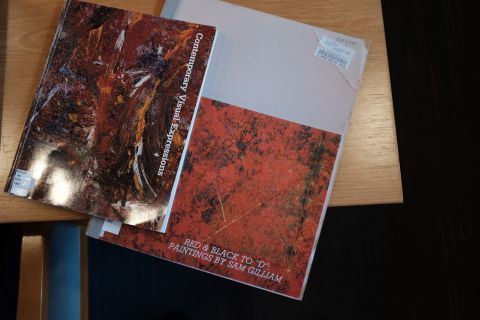