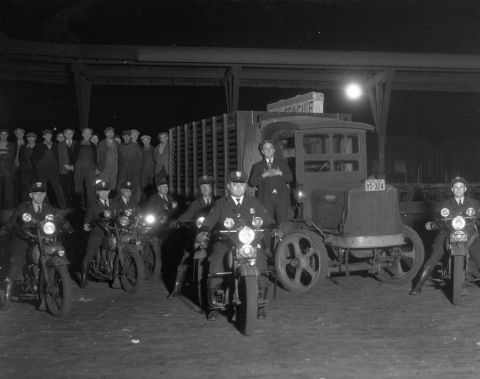 Whistler’s famous portrait of his mother was on loan to CMA from the Louvre in November 1933. The local arts reporter recounted her journey into town in a radio broadcast:

It was proud I was Wednesday night, or rather Thursday morning, when I formed part of the procession that escorted Whistler’s Mother from the express train to the museum of art. She is such a meek, kindly old lady as you see her there in Gallery VIII, but it took two police squad cars, eight motorcycle police, and three museum cars to chaperone her safely to her present home.

It was a grand spectacle we made as we sailed majestically out St. Clair Avenue to East 40th, across to Euclid Avenue and finally into port at the superintendent’s entrance. First came a squad car with a lovely siren that led the baying of the hounds. Next came the big American Express Company’s truck in which rode Whistler’s famous portrait of his mother, standing on her head we discovered later. Poor lady!

On either side of her were ranged the eight motorcycle cops, each equipped with a thoroughly effective siren. Back of the truck was the second squad car full of police officers. Finally came the car of Director William Milliken, with myself and I.T. Frary (museum publicity director) serving as rear guard. What a ride! We didn’t bother speed limits, but how we did crash lights. We prayed for ‘em and our prayers were answered. Twelve of them we counted and we sailed full speed ahead with sirens braying, while the midnight traffic of Euclid Avenue looked on wonderingly and admiringly. Various irreverent persons endeavored to break into the procession between Milliken’s car and ours, but we maintained close formation like elephants in a circus parade. We swept gloriously through two safety zones and five red lights between East 100th Street and East Boulevard and then as a traffic officer, who sprung up from nowhere in particular, held up east bound traffic at Severance Hall, we swung into the Park with a third squad car added to our entourage, and in a few moments the Louvre’s famous portrait of Whistler’s mother was safely at rest in the storage vault of the Cleveland Museum of Art.

The majestic sweep of siren hooting cars, through blinking red traffic lights with a million dollars’ worth of painting ahead of us in the big express truck and we as part of the pageant formed the high spot of my young life.