History of the Ingalls Library and Museum Archives

The Cleveland Museum of Art’s commitment to have a museum library staffed by a professional librarian coincided with the founding of the CMA in 1913. When the museum and library opened in 1916, the latter contained approximately 600 volumes, most of which were donated and reflected the collection, such as books on lace and armor. In the library’s early years, the most significant donation occurred in 1939, at the end of a decade of minimal purchasing because of the Great Depression. Upon the death of Julia Morgan Marlatt that year, the library was the beneficiary of the late William H. Marlatt’s collection of over 300 fine press printed books. Included was a nearly complete set of works printed from 1891 to 1898 at William Morris’ Kelmscott Press. The transition from a donations-based library collection to a strategically built collection was made possible by the bequest of more than $33 million to the museum by benefactor and trustee Leonard Hanna in 1957. The following year, with the collection steadily growing, the library moved to expanded quarters.

Although the library had been established with the CMA staff as the intended primary users, in 1967 the library welcomed another user group with the establishment of the joint Cleveland Museum of Art/Case Western Reserve University art history and museum studies program. In 1979, the library added its 100,000th volume, far surpassing the goal in 1913 of having 10,000 volumes; it was clear that more space would be needed. In 1983, a new library was constructed and named in honor of former trustees Jane Taft Ingalls and Louise Harkness Ingalls. In 2008 the library transitioned to the Library of Congress Classification System, and in 2015 the library added its 500,000th volume. The Ingalls Library is one of the largest art museum libraries in the country, with a growth rate of approximately 8,000 books and 3,600 auction catalogues per year, addition to more than 1,100 periodical subscriptions and 33 database subscriptions. To maximize space, more than five miles of compact shelving house the majority of the collection in the basement of the original 1916 building. 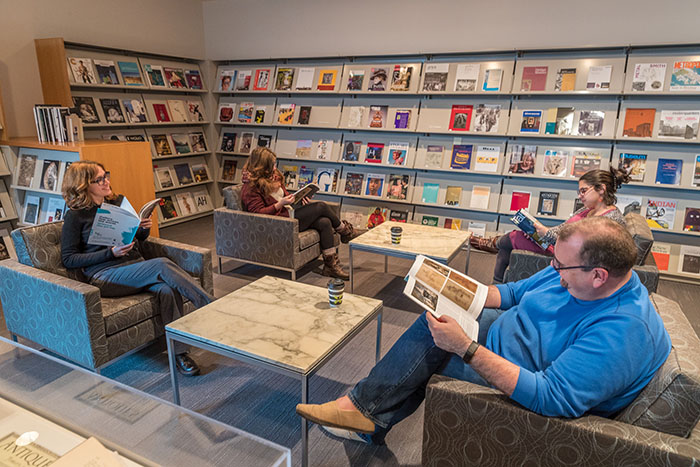 The need to balance preservation and access was noted in the initial vision for the library, as expressed in the Bulletin of the Cleveland Museum of Art in February 1916. Various measures are in place to protect the library collection. For example, the library has closed stacks and is non-circulating, though it lends replaceable materials through interlibrary loan and is a net lender, lending more than it borrows. Between 2006 and 2007, the library implemented a new security and inventory system using RFID (radio frequency identification) technology to secure and track the collection in time for an influx of users: since 2007, members of the public have been able to visit the library, page materials, and use the library’s electronic resources on site. The following year, a disaster preparedness policy and a collection development policy were introduced. Shortly after, two key spaces were completed: a book conservation lab for the repair and prevention of damage and, to minimize the handling of rare materials, a digitization lab with a high-end scanner.

Technology has been critical for facilitating access to the library collection. In 1979 the library joined the Research Libraries Information Network (RLIN), a national bibliographic database that combines the union catalogues of its members, allowing users to discover millions of titles through a single interface. The following year—through RLIN—the Metropolitan Museum of Art, Art Institute of Chicago, and the Ingalls library developed SCIPIO, a computerized union catalogue of art auction catalogues from 1599 onwards. In 1989, the Ingalls Library became one of the first art museum libraries to automate its card catalogue, enhancing access through the provision of more entry points, a transition made possible by the implementation of the SirsiDynix integrated library system in 1989 with funding from the Reinberger Foundation.

Technology continues to be critical for access in the 21st century. In 2007, the library switched from Sirsi Dynix to ExLibris’ Aleph, in large part because of its accommodation of various types of media. The library’s first major digitization undertaking was in 2008, with the conversion of almost 500,000 slides from the now defunct slide library, funded partially by a grant from the United States Department of Education. With an active digitization program in place, worldwide access to library and archival materials has been facilitated by adding content to free online search platforms, namely the Getty Research Portal and the Internet Archive. In 2010, the library was the first North American ExLibris user to develop a mobile catalogue, the “Bookmobile.” This initiative led to the use of iPads to prompt users to ask a question through a web-based application about art in general or about the museum’s collection, to be answered by reference staff and posted online in an archive of collective curiosity. Several applications later, Ask a Question is featured on the museum’s homepage, on a kiosk between two gallery spaces, and in the award-winning ArtLens Gallery. As the library expands its connections externally, it also welcomes new connections internally: in 2018, the library became a CMA exhibition space for the first time with the installation of Alex Jovanovich’s multimedia work as part of the FRONT International: Cleveland Triennial for Contemporary Art.

In 2017, the museum released a strategic plan to be implemented over the following decade.  Making Art Matter: A Strategic Framework for Our Second Century prioritized collection growth and storage, digitization, social media, provenance research, and the implementation of a new integrated library system. In collaboration with the Digital Innovation and Technology Services team, the library implemented WorldShare Management Services, a product of OCLC. As the name suggests, WorldShare allows the library to both contribute and benefit from a shared global repository of bibliographic resources.

The Museum Archives serves as the institutional memory for the museum. Established in 1989 through a grant from the Gund Foundation, the primary mission of the archives is to collect, preserve, and make available records that document the role of the Cleveland Museum of Art in the social and cultural history of the local community and in the world of art. Institutional records include administrative records of museum offices; audio and visual recordings of museum programs and events; oral histories; and ephemera, including preparatory sketches and works of art. The archives also acquires personal papers and manuscript collections that document the interaction of the museum with significant figures and organizations in the art world. These collections include those of affiliated organizations with a significant historical relationship with the museum; studios and arts businesses and industries with significant contributions to the local and broader artistic communities; manuscripts of artists, collectors, and scholars that relate to museum history; and papers of museum benefactors. Collections that are not restricted are available to museum staff, scholarly researchers, and the public. A robust digitization program ensures the availability of collections to a worldwide audience. Archives staff also create and maintains indexes, finding aids and databases to assist patrons in locating information in archives collections. 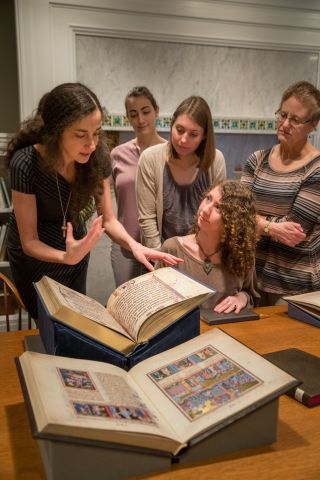 The Museum Archives also serves as the records management office for the museum. Records include all documentary materials in any medium made or maintained by museum staff and relating to official museum business. All records created by CMA employees during the performance of their jobs are the property of the museum and may not be discarded, deleted, or removed from the museum except in accordance with formal procedures. Museum archivists are responsible for educating staff about records management, creating and updating record retention schedules for each department, ensuring the timely transfer of records from offices to the archives, and arranging for the destruction of nonpermanent records.