The John C. Bonebrake collection consists of two watercolor drawings executed by Bonebrake during his scholarship summer in France in 1939. Each drawing is signed in pencil in the lower right corner and inscribed with the title in the lower left corner. The drawings have been digitized and are available on line at digitalarchives.clevelandart.org. 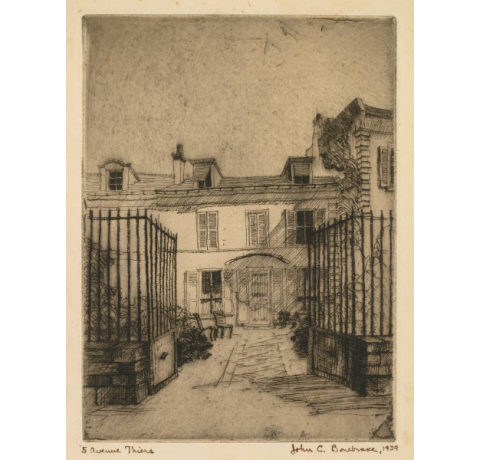 John Corwin Bonebrake (1918-2011) was the son of Frank, an engineer for Republic Steel, and Marguerite MacGregor Bonebrake. He grew up on Cleveland’s east side, graduating from Shaker Heights High School. He attended Western Reserve University where he received a degree in architecture in 1941. As a third year student he won the Charles Frederick Schweinfurth scholarship for study at the Ecole des Beaux-Arts at Fontainebleu. He spent the summer of 1939 in France including several weeks sketching in Normandy as he waited for his return steamer to America. At his first stop he drew the attention of local police who arrested him on suspicion of being a spy. For the remainder of his trip he made sure to obtain permits for sketching villages from local constabulary but was warned not to sketch any bridges. He returned to school just as war broke out in Europe. The architecture school exhibited his work from this trip in a special exhibition in October 1939.

Bonebrake enlisted in the U.S. army in October 1942 and served during World War II as a Warrant Officer. He was sent to Japan with an engineering unit to repair airstrips following the surrender in 1945. During this time he studied Japanese art and purchased his first prints.

Following the war Bonebrake worked as an architect, becoming a partner in the firm of Outcalt, Guenther, Rode, and Bonebrake. The firm was one of the largest in Cleveland, focusing on educational buildings including Rhodes Tower and other buildings at Cleveland State University, the Cuyahoga Community College metro campus, and the Cleveland Heights board of education building. The firm’s other major projects included expansions to Cleveland Hopkins International Airport and the Cleveland Convention Center. During his career Bonebrake served as president of the Cleveland Chapter of the American Institute of Architects.

Although he had begun collecting prints during the war, it was the Print Club of Cleveland, which he joined in 1961, that encouraged Bonebrake to collect in earnest. He became a passionate collector, focusing initially on images of cathedrals, castles, and other structures. Eventually he broadened his scope, collecting anything that piqued his interest or reminded him of his travels. His collection of nearly one thousand 19th and 20th century graphics included a variety of figural subjects as well as landscapes and works of historical interest executed in many different printmaking techniques. He loved sharing his collection with visitors which he exhibited, hung floor to ceiling, in his home. He even turned closets into small exhibition rooms. Because he intended to donate the works to the Cleveland Museum of Art, he acquired works specifically to enhance the strengths or fill gaps in the museum’s collection.

John Bonebrake’s legacy is a large and fascinating print collection that reflects the personality and interests of a unique individual and passionate collector. Eccentric, with a wry sense of humor, Bonebrake built an expansive collection on a small budget. He set an example for future generations of print enthusiasts advising them to “buy what you like but most important of all, have fun”.

The John C. Bonebrake collection consists of two watercolor drawings executed by Bonebrake during his scholarship summer in France in 1939. Each drawing is signed in pencil in the lower right corner and inscribed with the title in the lower left corner. The drawings have been digitized and are available on line at digitalarchives.clevelandart.org.

Open to the Public. For more information or to access this collection contact archives staff at archives2@clevelandart.org.

Existence and Location of Copies note

Digital reproductions of this collection are available electronically at digitalarchives.clevelandart.org.