John Taylor Arms (1887–1953) is one of the foremost American printmakers of the first half of the 20th century. He kept prolific diaries, nearly continuously maintaining daily entries for the last 30 years of his life.  Arms also recorded his life through photographs; documenting his time in the Navy, family vacations, fishing trips, and professional activities.  Included in this collection is an unpublished catalogue raissoné of the artist's works. 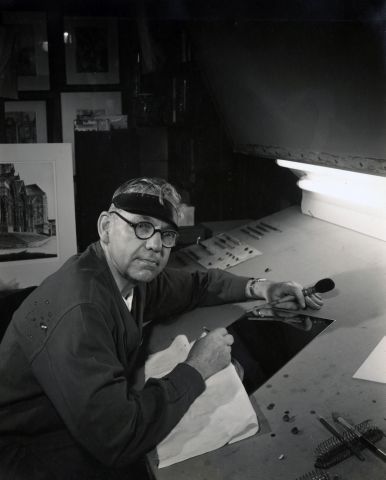 John Taylor Arms was born in Washington D.C. in 1887. After attending Princeton for two years, he transferred to Massachusetts Institute of Technology to study architecture. He graduated in 1911 and the following year received his masters. His B.S. thesis was on “A Renaissance Cathedral in France.” After graduation he worked at two architecture firms, becoming a partner at the latter. In 1913 he married Dorothy Frothingham Noyes. Dorothy gave John Taylor his first etching kit and continued to support him throughout his career. Arms dissolved his partnership at the architecture firm to serve in the Navy after America declared war in 1916. After being discharged in 1919, Arms devoted himself to his art. During his career he created numerous etchings and aquatints and was a strong advocate for the arts and artists belonging to several societies. Arms died in 1953.

With a few outliers, this collection spans from 1911 to 1953. It is composed of mostly bound manuscripts with the diaries making up the bulk of the collection. The collection is divided into five series, Diaries, Catalog of Work, Ephemera, Art Collection, and Photographs. Where possible, it was arranged chronologically or alphabetically.

Open to the public. For more information or to access this collection contact archives staff at archives2@clevelandart.org.

John Taylor Arms (1887–1953) is one of the foremost American printmakers of the first half of the 20th century. Trained as an architect, he spent the majority of his 50-year career documenting Europe’s great Gothic churches. Arms believed that art could be a tool for the spiritual and moral improvement of mankind and that Gothic cathedrals represented “the most significant expression of man’s aspirations.” He viewed printmaking as a vehicle for disseminating images of subjects that would uplift and inspire contemporary society.

Over several decades Arms traveled throughout France, Italy, England, and Spain drawing Gothic structures. These studies were the basis for the etchings he produced back in his Connecticut studio. Arms admired the craftsmanship of medieval art and used fine-gauge sewing needles set into wooden handles and magnifying glasses to draw the elaborate churches on copper plates. Extremely dedicated and industrious, Arms rendered each building with exceptional precision, spending 1,000 hours or more on a single plate. A gifted draftsman, Arms used only line to describe the texture of old stone, for instance, and to achieve a variety of tones. A technical virtuoso, he created compositions full of keenly observed details and nuanced light. Although the plates were most often printed with black ink, they are sometimes printed on pale blue antique paper or with colored ink.

Arms created more than 400 prints that explore a variety of subjects in addition to Gothic cathedrals. He began his printmaking career in 1916––after his wife gave him an etching set for Christmas––by depicting the architecture of New York City. After celebrating such marvels as the Woolworth building, however, he wrote, “I can admire the skyscrapers of New York, that unbelievable city which is a very gold mine for the architectural etcher, but I do not love them and I cannot etch what I do not love.” Arms studied the crumbling palazzo of medieval Venice where he overcame the challenge of mimicking the texture of decaying stonework and capturing watery reflections. In England he focused on the rural settings of parish churches and picturesque villages. In Italy he produced wonderful views of towns nestled in the hilly countryside. A sailor during World War I, Arms retained a great love of the sea and etched naval warships throughout World War II. Since travel restrictions curtailed the artist’s trips to Europe, a sojourn to Mexico resulted in impressive depictions of Taxco and the Yucatan Peninsula.