Donated by Irene Roosevelt Aitken along with other materials now in the museum's collection, this group contains scrapbooks, photographs, notebooks, and objects from Cleveland ceramicist and famed outdoorsman Russell Aitken. 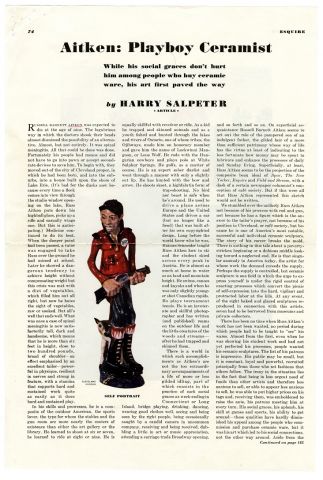 Russell Barnett Aitken was a celebrated ceramic sculptor and enamellist from Cleveland, most active during the 1930s. While a student at the Cleveland School (now Institute) of Art, Aitken began sculpting figures at the Cowan Pottery Studio alongside Viktor Schreckengost, his exact contemporary. He graduated from CIA as the class valedictorian in 1931. He also received a degree in journalism that same year from Case Western Reserve. From 1931-33, he did post-graduate study in Vienna with Professors Michael Powolny and Josef Hoffmann. After Cowan Pottery closed in 1931, Aitken set up his own studio in Cleveland. His fame grew among collectors and dealers alike and he moved to New York in 1935. He was known for his distinctive caricatures of people and animals in a style influenced by his contact with Viennese modernists. Prior to World War II, Aitken continued to exhibit and win 1st prizes in the annual May Show, maintaining his ties to Cleveland. His work in Surrealism brought him special acclaim and a placement in the Museum of Modern Art, in New York. Later, his mural for the 1939 World’s Fair, which was the largest decorative mural ever fired in vitreous enamel, was exhibited subsequently at the Metropolitan Museum and is a promised gift there currently.

Born in 1910, Aitken quickly discovered his two callings during his youth, sculptor and sportsman. He frequently traveled to the Canadian wilderness earning money as a guide and trapper. In these as with all things, Aitken pursued success with passion. He became a highly decorated soldier in World War II and a gunnery ace. Following the war, he went on to become one of the most celebrated outdoorsman of the 20th century. He was an associate editor for Field & Stream, and contributed over 300 articles about the genre. Aitken shot skeet, live pigeons, and big game, traveling to five continents to do so. In 1969 his book “Great Game Animals of the World” was published. Aitken married his first wife Anne Laurie Crawford Aitken in 1957. She was also a ceramicist and with her financial prowess they afforded their shared interests in houses, English and French furniture, rare books, arms and armor, decoys, African art, porcelain, silver, and fine decoration. Together they supported many philanthropic causes. The Annie Laurie Aitken English galleries at the Metropolitan Museum of Art and the Russell Barnett Aitken Arms and Armor galleries represent their generosity to that institution. After nearly 30 years of marriage, Anne Laurie died in 1984. Years later Aitken married Irene Roosevelt. Russell Barnett Aitken died in 2002.

The Russell Barnett Aitken collection was donated to the museum archives by Irene Roosevelt Aitken. The collection documents the artist's life and career through visual, textual, and three dimensional materials. It consists of six scrapbooks, four photo albums, loose photographs, three sketchbooks, one notebook, fifteen works of ar; and artist tools and molds.

Open to the public. For more information or to access this collection contact archives staff at archives2@clevelandart.org.