Emery May Holden Norweb, who was known as a grande dame of Cleveland, was one of the most influential women in the history of the Cleveland Museum of Art. She was born on November 30, 1895 in Salt Lake City. Her grandfather, Liberty Holden, was the owner of the Cleveland Plain Dealer, and her father was Albert Holden, a successful mining engineer. At the start of the First World War, Emery was driving ambulances and working in hospitals in France, and it was during this time that she married R. Henry Norweb. R. Henry Norweb was a United States diplomat, so throughout the couple’s marriage they lived in numerous places around the world, including Tokyo, Chile, the Dominican Republic, Mexico, Bolivia, Peru, Portugal, and Cuba. 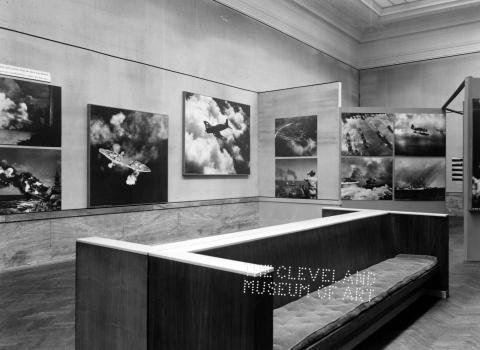 Edd Alvah Ruggles (1880-1940), seen in the image below, worked for the Cleveland Museum of Art for 25 years, serving as museum photographer and master printer.  Ruggles took many of the early photographs of the museum and its collections and was viewed as an expert in museum photography.

The story of the brave men and women who worked to rescue Europe’s greatest art treasures during World War II has been brought to the silver screen in The Monuments Men.  But did you know that monuments men also served in Japan? When the war ended and the allied occupation of Japan began, civilian monuments men were charged with protecting and preserving Japanese cultural heritage.